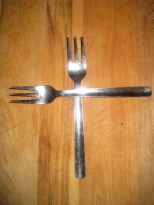 Over the summer ABC ran a second season of the series “Jamie Oliver’s Food Revolution,” in which the British celebrity chef fights to replace the processed food in school cafeterias with fresh produce and whole foods, and teaches Americans how to cook simple meals instead of patronizing the drive-thru, all the while emphasizing that this is a “life and death” issue.

First Lady Michelle Obama has made diet-related disease her primary cause, planting a teaching garden at the White House and encouraging Americans to get to know their farmers.

There is no denying that a foodie frenzy has taken hold in this country. Suddenly it is not enough simply to eat organic – you must find the most local produce possible at the farmer’s market. The new “status lawn” is a backyard homestead, complete with Victory Garden, compost bin, and free-ranging chickens. The Food Network has spun off a second cooking channel and has already spurred many competitors (from TLC to The Travel Channel) to feature food-centric shows. And just recently I read on my Starbucks napkin that they no longer use artificial colors or flavors, hydrogenated oils, or the real boogie man, High Fructose Corn Syrup.

The backlash against the “industrial food complex” is strong and vocal, demanding an end to the prevalence of convenient but unhealthy food produced in non-sustainable ways. The major players also call for an end to the prevailing wisdom of “Nutritionism” (Michael Pollan’s term): the idea that food is merely biological fuel in the form of key nutrients, and no matter how they are consumed, it is the nutrients that matter the most. No longer is the nutrition info box on the side of the carton the only place one should look to know whether something is good to eat (good not only meaning healthy, but also tasty! Which actually matters to these people!).

I call this lifestyle choice the “religion” of the foodie – it calls for a change in one’s eating habits that makes them less convenient, more expensive, and ultimately more satisfying and nurturing. I call myself a “FoodiEvangelist” because I believe that this dogma can be instructive to persons of faith (particularly those of my own persuasion, which is Christian). END_OF_DOCUMENT_TOKEN_TO_BE_REPLACED

At Table with Friends

At Table with Friends